There are FIVE major impacts of Hurricanes and Tropical Storms. North Carolina is one of the most hurricane ravaged states in the country. The coastal areas of the state can be susceptible to storm surge, high winds, rip currents, flooding and tornadoes. Even when hurricanes stay out to sea, the North Carolina coast can still be impacted by large swells and deadly rip currents!

The most active months for tropical systems in North Carolina are August, September and October. However, hurricanes have impacted OBX as early as May and as late as November! The peak tropical activity usually occurs in a six week period from mid-August to late September.

Don’t Just Focus on the Category

The Saffir-Simpson Scale (below) is a wind scale that uses WIND only to estimate potential damage. Unfortunately this scale does not tell you about ALL of the impacts that a hurricane can produce. It does not tell you how much rain will fall or how high the storm surge may be. It does not tell you anything about potential impacts from tornadoes or rip currents. It also does not give you information on how large the storm may be, or anything about the storm’s movement. Pay attention TO ALL of the impacts from a storm and not just the category. Hurricane Florence was “just” a Category 1 when it made landfall along our coast. 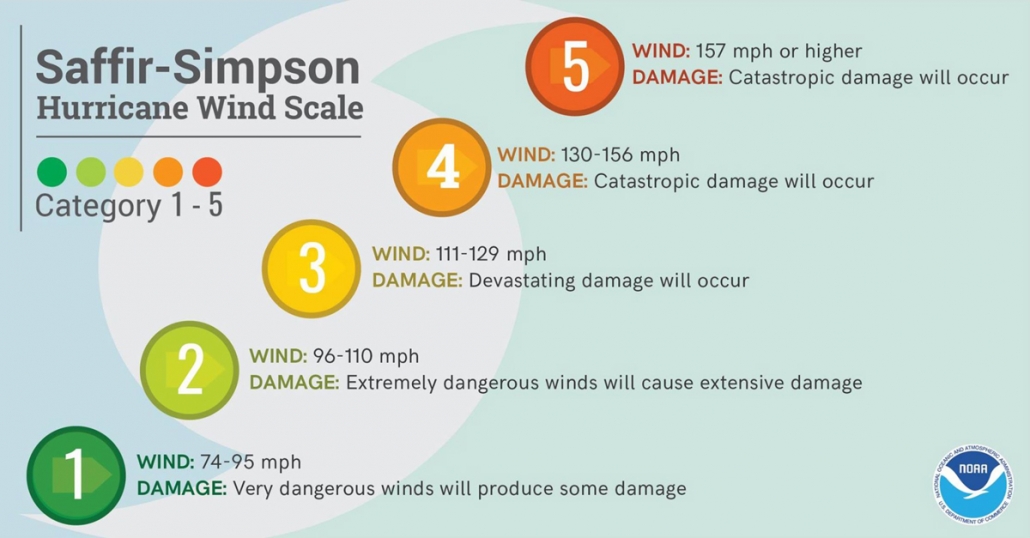 One of the greatest potentials for loss of life related to a hurricane is from the storm surge. Storm surge is simply water that is pushed toward the shore by the force of winds swirling around the storm. This advancing surge combines with the normal tides to create the hurricane storm tide, which can increase the mean water level to heights impacting roads, homes and other critical infrastructure. The shape and orientation of our coastline puts us at risk for storm surge. Recently, we saw devastating storm surge from both hurricanes Florence and Dorian.

The first thing you need to do is find out if you are in in a storm surge or hurricane evacuation zone. If you are, figure out where you’d go and how you’d get there if told to evacuate. You do not need to travel hundreds of miles. Identify someone, perhaps a friend or relative who doesn’t live in an evacuation zone. If possible, have multiple options and be sure to account for your pets and put the plan in writing. North Carolina Know Your Zone is a tiered evacuation system that highlights areas most vulnerable to impacts from hurricanes, tropical storms, and other hazards. If it becomes necessary, local officials will order evacuations using pre-determined zones created by coastal counties. The Know Your Zone lookup tool is a new color-coded interactive map you can use to determine the evacuation zone where you live, work, or are visiting based upon your street address. Evacuation zones highlight areas most at risk to storm surge and flooding. Local officials will determine which areas should be evacuated. Areas in Zone A will typically be evacuated first, followed by areas in Zone B, etc. While all zones won’t be evacuated in every event, emergency managers will work with local media and use other outreach tools to notify residents and visitors of impacted zones and evacuation instructions.

You will need supplies not just to get through the storm but for the potentially lengthy aftermath. Have enough non-perishable food, water and medicine to last each person in your family a minimum of one week. Electricity and water could be out for at least that long. You’ll need extra cash, a 30-day supply of medicines, a battery-powered radio and flashlights. Most of us have cell phones, and they all run on batteries, so you’ll need a portable, crank or solar powered USB charger. Before the storm, fill up your car or a gas can because you will not be able to pump gas if the power goes out. See Emergency Supply Kit

ANY tropical system is capable of producing tornadoes! Tropical tornadoes are often short lived but they can produced enhanced areas of damage. Sometimes these tornadoes can occur in the outer rain bands, well ahead of the center of the storm. In 2019 Hurricane Dorian produced an EF-2 tornado in Emerald Isle, NC with estimated winds of 115 MPH.

Even when hurricanes stay out at sea, the Outer Banks can still be impacted by large swells and deadly rip currents, thus making it important to stay aware of the tropics and weather forecasts all throughout the hurricane season. Rip currents are channelized currents of water flowing away from shore at surf beaches. Rip currents are quite common and can be found on many surf beaches every day. They typically form at breaks in sandbars, and also near structures such as jetties and piers. While the risk of rip currents occurring along the North Carolina beaches increases when a tropical cyclone is out in the Atlantic, the risk increases when a tropical cyclone is moving toward the North Carolina coast, especially when the storm is a day or two away from making landfall along the Carolina coast.

Rip currents are dangerous because they can pull people away from shore. Every summer, Corolla Beach Rescue pulls many 100’s of people caught in rip currents out of the ocean. Rip current speeds can vary from moment to moment and can quickly increase to become dangerous to anyone entering the surf. Rip currents can sweep even the strongest swimmer out to sea. Some clues that a rip current may be present include a channel of churning, choppy water, a difference in water color, a break in the incoming wave pattern, and a line of foam, seaweed or debris moving seaward.

If you find yourself caught in a rip current, stay calm and don’t fight the current. Escape the current by swimming in a direction following the shoreline. When free of the current, swim at an angle—away from the current—toward shore. If you are unable to escape by swimming, float or tread water. When the current weakens, swim at an angle away from the current toward shore. If you feel you will be unable to reach shore, draw attention to yourself: face the shore, call or wave for help. Also, don’t become a victim while trying to help someone else! Many people have died in efforts to rescue rip current victims. Instead, get help from a lifeguard. If a lifeguard is not present, yell instructions on how to escape. If possible, throw the rip current victim something that floats. Call 9-1-1 for further assistance. 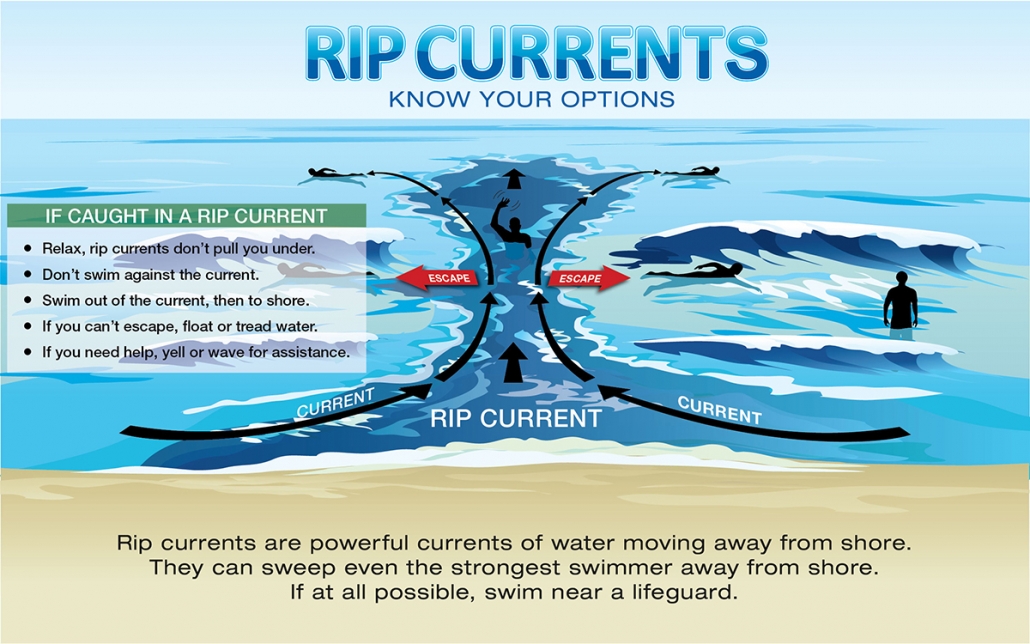 Corolla Fire & Rescue will not respond to fire calls once winds exceed 35 mph due to the risk to apparatus and crew. Please be aware of this. Following major storms, CFR assists Currituck County in doing property damage assessments. CFR will also assist in setting up pumps and hose for emergency pumping to the ocean in extreme flooding situations following a major storm.